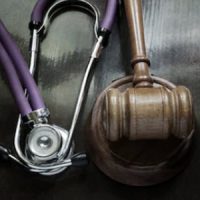 The Florida Second District Court of Appeal overturned an arbitration judgment that prevented a Florida widow from pursuing a case against Naples Community Hospital. The plaintiff initially filed the lawsuit jointly with her husband. While the case was in litigation, however, her husband died, forcing her to amend the lawsuit to a wrongful death action. The case was sent to arbitration by the trial court. The arbitrator entered a decision in favor of the hospital. The question at play was whether or not the plaintiff was allowed to go to trial or if they had to accept an arbitrator’s judgment. The appeal allows the case to move forward to trial.

Two Plaintiffs in This Case

While her husband was still alive, both she and her husband were named as plaintiffs in the lawsuit. While this may seem odd, spouses are entitled to recover damages when their husbands or wives are injured. Depending on the extent of the injuries, they can recover damages for loss of consortium and emotional anguish.

It is not uncommon in cases where catastrophic injury is at play for a spouse to sue the at-fault party for non-economic damages.

Loss of consortium is a type of damage in a civil tort claim against a negligent party. A claim for such damages is made against the at-fault party by a spouse of the victim. The claimant alleges that because of the at-fault party’s negligence, they can no longer enjoy the benefits of their relationship with their partner, even if the partner survived the medical negligence.

In a wrongful death lawsuit, a spouse can claim loss of consortium along with emotional grief and loss of companionship. The lawsuit can also include the deceased’s physical and emotional pain as part of the compensation.

In addition, spouses can claim any economic hardship they have to endure due to the untimely absence of their spouse. In cases like these, lost wages up until the prevailing average life expectancy can be compensated based on the prorated yearly earnings of the decedent.

Where there are children in a marriage, the children can be compensated for their loss of moral guidance and receive some of the financial benefits of the lost wages as well.

When one spouse files a claim for loss of consortium against an at-fault party, they must show that a marital relationship existed that now no longer exists. In some cases, this can be as simple as there being friction in the relationship because of an injury. In other cases, it can mean that the couple can no longer have sex with one another.

If a negligent doctor has injured you or your loved one, the Tampa medical malpractice attorneys at Palmer | Lopez can file a lawsuit against the at-fault party on your behalf. Talk to us today for a free consultation and we’ll discuss what kind of compensation you’re likely to receive.