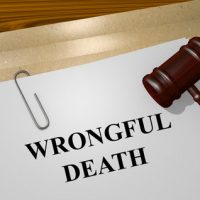 Florida’s Wrongful Death Act is the subject of widespread controversy. This is due in large part to the seemingly arbitrary limitations placed on who is and is not allowed to recover damages on behalf of a deceased victim. Take the follow situation for example, a retired father of three independent, adult children (over the age of 25) dies in the hospital because a nurse administers five times the allowable dose of a particular medication. In that context, surprisingly, there may very well be no viable medical negligence claim whatsoever, given the wrongful death act’s limitations on damages.

Why are claims like this, and others, not viable?

The Florida Wrongful Death act delineates what “damages” or losses are recoverable when one dies as a result of medical negligence. Typically speaking, if there is a spouse at the time the individual passes, children under the age of 25, or other dependents, the statute provides that those individual “survivors” are entitled to damages. However in instances such as the above, where there is no surviving spouse, no minor children, no dependents and no on-going earnings or “accumulations” by the Decedent that there are no damages. And so while technically there may be a “case” or an act of “malpractice” it is without teeth as there is no remedy available. A similar scenario can arise when someone’s child dies and he is over the age of 25, based on other provisions of the Wrongful Death Act.

Why Has This Been Allowed to Happen?

Through lobbying agendas pushed by insurer’s and large hospital chains, several statutes and regulations have passed into law, all designed to deter and minimize medical malpractice actions. The perception was that so-called “frivolous” lawsuits were driving up the cost of malpractice insurance and that this, in turn, was driving up the cost of health care and otherwise causing physicians to leave the state. The perception was that doctors and hospitals needed to be protected from “junk” lawsuits. While many of these reforms were tossed out of the books for being in direct violation of Florida’s State Constitution, many still remain.

Until Florida’s legislature takes aim at these statutes, many bereaved families are left wondering why their loved one’s doctor was let off the hook for medical malpractice that resulted in a death.

If you’re wondering if you can collect damages for your loved one, please contact us at Palmer | Lopez of Tampa, Florida or give us a call at 813-506-5651. We’ll discuss the particulars of your case and see what can be done.