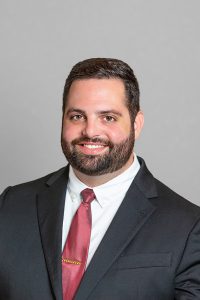 Cole Masterson is an associate attorney with Palmer | Lopez, practicing in auto accidents, slip or trip and falls, wrongful death, and medical malpractice. Originally from Pittsburgh, Pennsylvania, Mr. Masterson relocated to Bradenton, Florida, where he attended Lakewood Ranch High School. In 2014, Mr. Masterson graduated from the Florida State University. After earning his college degree, Mr. Masterson returned to Tallahassee and began law school at the Florida State University College of Law, where he served as a staff editor for the Law Review. He joined Palmer | Lopez in 2019 and is dedicated to helping those who have been negligently injured. Mr. Masterson is licensed by the Florida Bar to practice in all Florida state courts.