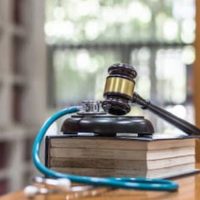 The family of a teen who died in Fulton County Jail has filed a medical malpractice lawsuit against the facility’s health care provider after the high schooler complained of chest pains for two weeks. The family contends that the teenager would still be alive if they had taken his complaints seriously and brought him to the hospital for X-rays.

It is becoming increasingly more common for jails and prisons to outsource their medical care to medical providers. While some have lauded outsourcing as a major way to save money, others believe that the money is saved by delivering a lower-than-standard quality of care.

The boy was being held in an Atlanta jail on an $8,000 bond after receiving stolen merchandise.

The boy died of a cardiac tamponade resulting from a ruptured aorta. When he was first booked into the prison, the deceased appeared to be in good health, but shortly thereafter, began complaining of chest pain. The boy described “chronic, intense, aching pain” and palpitations during an examination by prison medical staff. A physician’s assistant determined the pain was “possible heartburn” and gave him ibuprofen and an icepack and told him to return if his condition worsened. Medical staff began giving him antacids on a regular basis, but a follow-up appointment was canceled and no one checked in on him again. He was found unresponsive in his cell at 7:30 am.

According to the plaintiffs, the boy’s mother urged jail personnel to take him to a hospital to have him evaluated, but they never did. She believes that the substandard medical care is responsible for her son’s death. They are accusing the jail of medical negligence and gross medical negligence. The family contends that had the staff performed a simple EKG or a chest X-ray, the underlying aortic rupture would have been identified.

Fulton County is not named in the lawsuit. This is likely a strategic decision by the Plaintiff. Conservative states tend to have stronger sovereign immunity laws and damages in cases against the government are capped usually around $150,000 to $300,000. So taking aim at the medical service provider is the smarter play. They are not protected by sovereign immunity and thus are liable for the quality of care they provided.

The patient’s medical records will provide the bulk of the case against the jail medical provider. A young man complaining of severe chest pain was treated with antacids and over-the-counter pain medication while numerous requests for a more thorough evaluation were denied or ignored. The health care provider has denied that they committed any form of negligence in the rendering of care to the inmate, but the family says his death was preventable.

If you’ve been injured by a medical doctor, call the Tampa medical malpractice attorneys at Palmer | Lopez today to schedule a free consultation and discuss your situation in more detail.