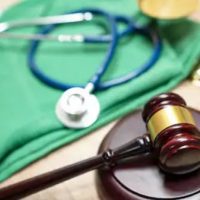 Delvin Breaux, a former cornerback for the New Orleans Saints, has filed a lawsuit against team doctors alleging medical negligence. The team doctors charged with Breaux’s care have since been fired and replaced.

The doctors diagnosed Breaux with a leg contusion, but as it turned out, his fibula was actually broken. Breaux’s career was cut short after doctors misdiagnosed Breaux’s injury.

The lawsuit names two doctors and the company they worked for. The company stands behind the quality of care rendered to Breaux and an independent medical panel recently ruled that the doctors in Breaux’s case rendered an appropriate standard of care. Nonetheless, Breaux’s lawsuit will be allowed to move forward.

The doctors were fired immediately after the team discovered that Breaux’s “leg bruise” was actually a broken bone. The injury was sustained during training camp. The doctors ordered an MRI and an X-ray later determining that it was a bone bruise. The cornerback continued training but became worried that his leg continued to hurt.

In August, Breaux was still in considerable pain, so he sought the advice of another doctor. These doctors determined that Breaux had a fracture to his fibula. Eventually, Breaux had surgery performed on his leg and the Saints placed him on injured reserve.

Stress fractures, like the one that Breaux suffered, can be difficult for doctors to diagnose, and just because Breaux suffered a poor medical outcome, doesn’t mean that it rises to the standard of medical malpractice.

In Louisiana, noneconomic damages are capped at $500,000, but there is no cap on damages related to future medical expenses. Given that Breaux sacrificed a promising career with the Saints having led the team in interceptions, Breaux will get far less than he lost even if his case is allowed before a jury.

In 2018, Breaux returned to the Canadian Football League, where his career had begun. He was paid $200,000 plus incentives which is considerably less than he made in the NFL. Breaux is now listed on the Hamilton Tiger-Cats roster although the CFL will be suspending this year’s season due to the coronavirus pandemic.

The owner of the Saints, who is also the owner of the New Orleans Pelicans, retained one of the doctors named in the lawsuit after firing him from the Saints to provide medical services to the Pelicans.

Whether or not Breaux’s lawsuit against the Saints’ team doctors will be successful depends heavily on whether or not a jury finds that a reasonable doctor would have recognized the fracture. It will be a hard case to win.

If you’ve been injured by a medical doctor, the Tampa medical malpractice attorneys at Palmer | Lopez can help you file suit and recover damages related to your future medical expenses, lost wages, and reduced quality of life. Call today to schedule a free consultation.