Not All Mishaps Are Malpractice 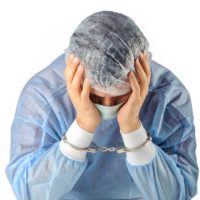 As much as the science of medicine has advanced, and as many previously fatal diseases are now curable, not all visits to a doctor or hospital can end with the patient making a full recovery. When patients sustain preventable injuries or their conditions worsen because of negligence or errors on the part of doctors or hospital staff, though, it constitutes medical malpractice.

To the contrary, a bad outcome does not always mean there has been malpractice. Often times, poor patient outcomes are the result of medically accepted known complications. Every procedure has risks and physicians are not otherwise to be deemed an insurer of a good outcome. Similarly, there are situations where individuals have a bad outcome, but as a result of some other entity or person’s negligence than the physicians.

The Story of Dr. George Arcos and the Contaminated Spinal Injections

Dr. George Arcos is a Florida physician with a background in anesthesiology and pain management. While Dr. Arcos was operating a pain management clinic in Tallahassee, his clinic received a batch of contaminated medication used for spinal injections. Twenty-five patients contracted Staphylococcus aureus infections from the injections, infections that were serious enough to require hospitalization; ten of them even had surgery to treat complications arising from the infections.

Why There Was No Medical Malpractice Litigation

Every complaint ever filed against Dr. Arcos in his entire career stems from one batch of contaminated medication. As soon as Dr. Arcos had any indication that something was wrong with the medication, he stopped using it and immediately notified the Department of Health. Upon inspecting the clinic, the Department of Health found nothing amiss except for some lapses in infection control such as using single-dose vials of medicine more than once. (Available reports do not make it clear whether these vials included the ones that contained the contaminated medication.) In short, there was nothing Dr. Arcos could have done to find out sooner than he did that the medication was contaminated. As soon as he found out, he followed the appropriate course of action to prevent more patients from becoming infected.

In this instance, the injuries did not appear to have been caused by the negligence of the physician. And while, in situations such as this there can be liability on others including pharmacies and other retailers, there was nothing found to have been done wrong by the physician himself that actually resulted in the injuries ultimately sustained.

Some adverse outcomes of medical treatments are preventable, while others are not. If you think that your injury was caused by a physician’s error, contact Palmer | Lopez in Tampa, Florida to discuss the details of your case.