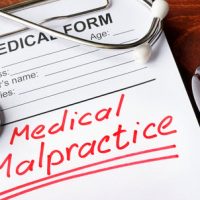 An ophthalmologist and a surgery center agreed to settle a lawsuit brought forth by a 70-year-old woman who was going in for cataract surgery. In 2016, the ophthalmologist performed cataract surgery on the plaintiff, but five weeks later, the plaintiff returned for an emergency surgery. She was complaining of blurred vision, floaters, tearing, and the sensation that there was something in her eye. The doctor diagnosed the woman with corneal edema and prescribed anti-inflammatory medication to control the pain.

The woman’s condition worsened, and she went to see another doctor who diagnosed her with a post-surgical bacterial infection in her eye. It was then that the plaintiff filed her lawsuit against the doctor.

What Didn’t This Doctor Do?

When bringing a medical malpractice lawsuit against a doctor, the plaintiff must show that the doctor either did something or failed to do something that deviated from the accepted standard of care for a patient. In this case, the plaintiff alleged that the doctor failed to perform a more thorough inspection on her eye and that if he had, he would have recognized the bacterial infection earlier.

The doctor raised the defense that the patient’s condition was extremely rare and, therefore, it’s not standard practice to look for or treat a bacterial infection in the eye. He insisted that this was the prevailing standard of care for his profession.

However, the plaintiff was able to produce an expert witness and fellow ophthalmologist who testified that eye infections must be caught early and that failing to catch it early resulted in permanent damage to the plaintiff’s eye.

The trial continued along until the plaintiff was able to produce an expert witness who testified that the attending doctor failed to catch an infection that he should have known was a possibility. The doctor also testified that catching the infection early is important because it prevents serious damage to the eyes. It was then that the defense offered to extend a settlement of $500,000 to the plaintiff to dismiss the case.

Damages in This Lawsuit

Damages in a lawsuit like this would be calculated primarily by discussing the patient’s pain and suffering throughout the period directly after the surgery and the several months that followed. The infection can be corrected with antibiotics and sometimes there is permanent damage to the eye while other times there isn’t. The testimony that a timely diagnosis of an eye infection is crucial to preserving the eye was especially damning.

If you’ve been the victim of medical negligence, call the Tampa medical malpractice attorneys at Palmer | Lopez today to schedule a free consultation and learn more about how we can help.