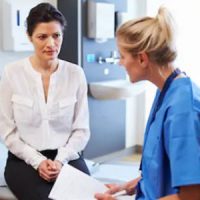 A Polk County woman is suing her doctors after she says they missed clear signs of breast cancer. Misdiagnosis lawsuits are among the most common types of medical malpractice lawsuits filed. In such cases, a plaintiff claims that their doctor negligently failed to timely diagnose a medical condition, and that such failure resulted in injuries to the plaintiff. In this article, we’ll take a look at the Polk County woman’s lawsuit and discuss how these sorts of medical malpractice lawsuits play out in the courts.

A 41-year-old woman is claiming that by the time she was diagnosed, she had already developed stage-4 breast cancer. In other words, there is an exceedingly high likelihood that the patient will die because her breast cancer is too advanced for treatment.

In 2018, the woman went to her primary care physician complaining of a painful lump in her breast. Both the doctor and his nurse allegedly failed to examine the lump and failed to perform the routine diagnostic workup. She went back multiple times, and the doctor assured her that it was just her menstrual cycle and that she should “ignore” it.

After moving to Indiana, the pain became excruciating and she went to an Indiana hospital where she was diagnosed with stage-4 breast cancer. By the time the doctors caught it, the cancer had already begun invading her lungs.

What Should Have Happened?

The American Cancer Society encourages all women to immediately report any change in their breasts, any lumps, and any physical pain. Deaths from breast cancer are common, and the prognosis depends on getting early treatment. It is therefore standard practice to at least biopsy the lump to ensure that it isn’t cancerous. The doctor, in this case, appears not to have done that, refusing to even look at the lump despite the patient’s complaints of pain. Since this doctor did not employ the prevailing standard of care for his patient, the patient’s lawsuit has merit.

Communication between Patients and Doctors

One of the most difficult elements of being a patient is figuring out what exactly to say to your doctor to ensure that you get the right treatment. While reporting a painful lump on your breast generally results in doctors testing the lump, this is a case where the doctor seemingly failed to respond to the patient’s complaints. As such, assuming that the patient’s allegations are factual, this is a somewhat clear-cut case of misdiagnosis.

If you’ve been injured by a medical doctor, call the Tampa medical malpractice lawyers at Palmer | Lopez today to discuss your situation and your options moving forward.