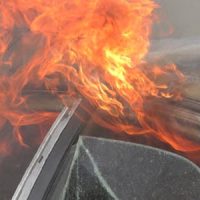 Tesla is facing another lawsuit related to a 2021 Model 3. According to attorneys representing the family of a man who died in his Tesla, the suspension on the vehicle failed causing it to strike the roadway, ignite the battery, and end in a fiery crash. The man’s family has filed a wrongful death and product liability lawsuit against the vehicle manufacturer.

Four days prior to the accident, the man brought the Tesla to be serviced for steering and suspension issues. A service manager inspected the vehicle and allowed the man to drive the vehicle off the lot without the problems fixed.

The event recorder shows the vehicle traveling at about 90 mph as it is traversing an intersection moments before the crash. During this period, the driver never pressed the brakes. Just prior to the crash, the dashcam video from another car shows sparks flying from the vehicle just before the Tesla came to a stop. Police believe that the driver was accelerating to beat a changing light. The Tesla hit a bump in the road which caused the suspension to fail and sparks to fly. The driver lost control of the vehicle and died as a result of the accident.

In October, roughly 3,000 Teslas were recalled due to a front suspension lateral link that was not secured properly during manufacturing. The lawsuit does not mention whether the plaintiff’s Tesla had been recalled.

Analyzing fault in this claim

The problem for the driver’s case is that he was seemingly speeding and there may have been an active recall on his vehicle that he never got serviced.

The problem for Tesla is that the driver brought the vehicle to the dealership to handle a suspension issue that later turned out to be fatal.

If the vehicle had a recall, that would potentially reduce a typical plaintiff’s award since some of the negligence would then pass to the driver for failing to get the open recall serviced. However, this plaintiff’s vehicle was likely not named in the recall which is why the dealership did not fix the problem when he brought it.

The other matter for the driver is the speeding. The speeding did not cause the suspension failure, but it certainly impacted the severity of the accident. A car going 90 mph takes a lot more damage than a car going 30 mph, so the driver will be assigned some of the liability here.

That does not, however, entirely erase Tesla’s liability. Product manufacturers are strictly liable for their products. When a product fails and causes death or injury, the company is liable. In this case, it appears that a manufacturing defect resulted in the suspension failure.

If you’ve been injured in an auto accident, you may be able to file a claim against the other driver, the auto manufacturer, a repair shop, or others who contributed negligence. Call the Tampa personal injury lawyers at Palmer | Lopez today to schedule a free consultation and discuss your situation in more detail.