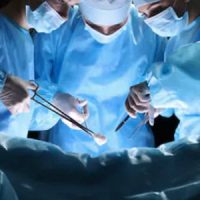 A 40-year-old Missouri man went to Pinnacle Regional Hospital in Overland Park, Kansas for a hip replacement. At 6’1” and 240 lbs, the patient was considered “obese” by doctors even though he had been a physical fitness buff for years before he began to show stress injuries to his back. For that reason, he was considered a poor candidate for back surgery even though he hadn’t been able to work in the past five years. One of his doctors instead recommended a hip replacement surgery to help ameliorate the pain.

After the procedure was performed, the patient began showing signs of infection at the surgical site. He returned to the hospital 13 days after the surgery and was treated with pain medication, antibiotics, and the wound was redressed.

Over the following weeks, he was discharged and admitted several times for an infection at the surgical site, but nothing seemed to clear it up. A surgeon eventually attempted to remove the hip replacement parts but ended up fracturing his femur in the process. Medical records show that the patient was administered large quantities of antibiotics and opioid-based pain medication (including fentanyl) and well as benzodiazepines such as Valium. A nurse found him unresponsive and attempted to transport him to another hospital, but it was too late. The patient was dead.

The aforementioned patient was not the only one to die at the Pinnacle Regional Hospital, which underwent a name change after being forced into Chapter 11 bankruptcy. This patient died after he underwent a spinal fusion for back pain. He was discharged from the hospital despite showing signs of an elevated temperature. An autopsy later revealed that he had pneumonia. He was found unresponsive in his home and pronounced dead by paramedics.

The deaths came as the hospital was in peril of losing its Medicare funding, which is just about the strongest leverage the government has over a hospital. According to sources, the hospital needed to make a specific quota of surgeries in order to qualify for Medicare funding. In order to reach this quota, they began performing surgeries that were not medically necessary on patients who may not have been good candidates for the procedure.

At least this is the argument that the families of the two men mentioned above will make as they attempt to sue the hospital for medical malpractice and wrongful death.

The question of whether or not the surgery was medically necessary is not the backbone of the families’ lawsuits against the hospital. They are claiming that the hospital failed to provide an adequate standard of care and should have referred both patients to other hospitals that had the facilities necessary to treat them properly.

If you’ve been the victim of medical negligence, the Tampa medical malpractice attorneys at Palmer | Lopez can file a lawsuit against the doctor or their hospital and recover damages. Talk to us today to arrange a free consultation.