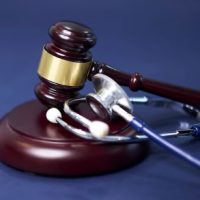 NFL quarterback Tyrod Taylor currently plays for the New York Giants. However, when he was previously playing with the Chargers, a team doctor administered an injection to help him manage a rib cartilage tear. The doctor inadvertently administered the pain medication into his lung causing the lung to collapse. Taylor has since sued the Chargers’ team doctor for medical malpractice. It appears he is seeking at least $5 million in damages related to the collapsed lung.

Taylor alleges that he suffered severe physical pain and hospitalization as a result of the punctured lung. He also alleges that he lost his job as the Chargers’ starting quarterback when he had to miss games due to the injury. His attorneys contend that this cost him millions in potential compensation as he entered free agency as a backup as opposed to a starting QB. Taylor has since signed a two-year deal with the NY Giants for about $17 million.

You are allowed to sue a negligent actor for money you would have made had you not been injured. In the case of a professional football player, it is quite easy to determine that his earning capacity was reduced thanks to this injury. While it may be questionable to presume another team would have paid Taylor more than $8.5 million a year, it’s certainly possible if he has a strong season under his belt. There is also a possibility that, absent the injury, he would have had a poor season, thereby reducing his value as a free agent. His attorneys will have to show that it’s more likely than not that Taylor would have made more than $8.5M per year had remained healthy.

For a regular human being, the loss of earning capacity doesn’t typically amount to $5 million a year. Instead, individuals who sustain injuries by negligence may not be able to perform their duties at work any longer. That means that they need to either get another job or find some other means to support themselves. Likewise, they can use the money from a personal injury settlement to secure training to do work that they can now perform.

The problem with Taylor’s argument is that there’s no way to prove he would be absolutely making more money this year had he been allowed to start the 2020 season. He was replaced that season by Justin Herbert who set several records for rookies at the QB position. Taylor went on to become the starting QB in Houston and ended up being replaced after a hamstring injury. He made over $12 million that year. So there is a legitimate chance that, even absent the injury, he would have lost his job as a starter. Nonetheless, he deserves to be compensated for his injuries. Just probably not for a starting quarterback position.

Palmer | Lopez represents the interests of Tampa residents who have suffered an injury due to medical malpractice. Call our Tampa medical malpractice lawyers today to schedule a free consultation and learn more about how we can help.