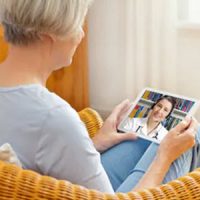 Due to concerns over the coronavirus, a number of things are being done virtually. As such, many patients are turning to telemedicine as a safe method of communicating medical symptoms and concerns to healthcare providers.

One such patient was a 62-year-old obese man who recently used a telemedicine service to report increased swelling after having a cast put on his leg during an emergency room visit three weeks prior. The telemedicine doctor advised him to keep the leg elevated and to see an orthopedist within 24 hours. The doctor also recommended that the patient come in for an ultrasound later that day.

The man never made it to his appointment. He was found dead in his home, and his family has filed a lawsuit against his doctor arguing that they failed to timely diagnose deep vein thrombosis. They argued that the man should have been referred to emergency care immediately.

Telemedicine in and of itself is not a cause to bring a medical malpractice lawsuit. The aforementioned suit was related to the doctor’s failure to timely diagnose the patient and refer him to emergency care. That choice can be directly linked to his death. But did the doctor do anything wrong?

Medical negligence is a complex concept because, to succeed as a medical malpractice Plaintiff, one must show more than that a doctor merely made a mistake. The doctor’s mistake must have occurred as a result of the doctor failing to meet the prevailing standard of care for their profession. Did this doctor do that?

It’s difficult to say. Telemedicine is very new and so the standard of care which telemedicine doctors are held to is not clearly defined. Sure, the family can say that the patient died because of the doctor’s choice, but that doesn’t mean the doctor is guilty of medical negligence.

For obvious reasons, telemedicine will avail itself to more diagnostic errors. Doctors cannot touch the patient and noticing subtle symptoms can make a huge difference in a patient’s course of treatment and ultimate outcome. The patient described above only mentioned that there was increased swelling. In some cases, swelling is the only symptom of deep vein thrombosis, but the condition can turn critical quickly if left untreated.

From 2014 to 2018, well before COVID, 66% telemedicine medical malpractice suits were for diagnostic error. However, the majority of all medical malpractice lawsuits are as well. But other problems can occur related to documenting a patient’s condition and poorly executed consent forms.