Woman Files Lawsuit After Being Impaled By Beach Umbrella 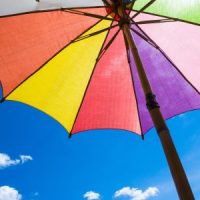 In 2018, a Maryland woman was somehow impaled by a beach umbrella. She has since filed a lawsuit against the manufacturer of the umbrella and the town in which the incident occurred.

The plaintiff was relaxing on the beach when a gust of wind blew a nearby umbrella into the air. The umbrella landed on the woman’s chest and impaled her, resulting in serious injuries. Rescuers cut the umbrella down leaving only the tip in the woman’s chest. She was then airlifted to a nearby hospital.

The woman survived, but she continues to have injuries and disabilities to this day, including pain in the area of the wound, numbness, and tingling in her extremities, as well as a host of mental health issues resulting from the trauma itself.

God may have caused the wind to blow, but it was man who designed an umbrella with a tip sharp enough to penetrate bone. It was also man who selected these beach accouterments for rental.

Weaker, but still meritorious, claims against the company that rented the umbrella will allege that they created or contributed to a dangerous and avoidable condition. The town might be held liable under the same theory.

Of course, the plaintiff could not hold the company accountable if she stabbed herself with the umbrella or even used the umbrella in a way that could not have been anticipated by the company. But the umbrella didn’t even belong to her. She was simply nearby when it took flight.

Here, the claim against the umbrella company will allege that a design flaw in the umbrella led to her injuries. It’s hard to imagine a universe in which this claim would fail. The company that designed the umbrella will be held accountable for the design flaw. The rental company that made the umbrellas available to the public may also share liability. The township will likely not face liability for the conduct of a subletter.

If you’ve been impaled by any wayward umbrellas, or otherwise injured by a defective or negligently designed product, then you are entitled to recover damages related to your injuries, past, present, and future along with compensation for post-traumatic stress, and loss of employment. Call the Tampa personal injury lawyers at Palmer | Lopez today to schedule a free consultation.