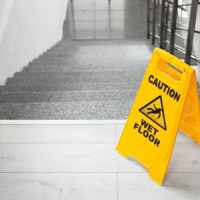 A woman who was training to work with special needs kids was staying late at work in preparation for her exam. She and another worker were asked to clear out of their offices while a carpet cleaning crew came through and treated the carpets. According to the plaintiff, she was required to leave her office and attempted to descend a stairwell when she slipped on a newly-installed epoxy flooring and tumbled down the stairs.

The plaintiff argued that the company failed to place warning signs, or otherwise warn anyone of the slippery flooring, or to utilize slip mats to prevent slip-related incidents. These failures resulted in the plaintiff suffering a needless injury, including a concussion.

After taking a tumble down the stairs, the worker drove herself home, but the next day, she went to an urgent care facility as she had begun to develop cognitive problems, headaches, and difficulty concentrating. There, she was diagnosed with a head injury.

Over the next few weeks, her cognitive issues became more severe forcing her to resign from her position. Now, six years later, her head injury is still causing her to suffer memory problems, executive function issues, and mood disturbances.

The woman recently won her lawsuit against the carpet cleaning company and was awarded $12 million.

Carpet cleaning companies make floors wet. There isn’t much you can do to prevent that. They are paid to come into buildings, clean the rugs, and the rugs become wet afterwards. The carpet company likely blamed the plaintiff for failing to account for an open and obvious danger.

However, the carpet company has a duty of care to prevent reasonably foreseeable injuries from occurring. In this case, the epoxy flooring became slippery when the plaintiff tracked water from the rugs to the floor. Since the area was by a stairwell, it would have been within a reasonable person’s duty of care to ensure that the area had rubber mats to prevent a slip hazard. In this case, the flooring company ignored the obvious danger and someone was seriously injured due to that negligence. The jury returned a verdict in which it held the carpet company 100% liable for the injury.

The verdict was as high as it was because the results of the injury were so severe. In a personal injury case, there is no universal standard for compensation. Instead, the jury award is tied to the plaintiff’s overall damages. In this case, the injury will prevent her from pursuing her career. So, the amount of money she could be expected to make throughout her career becomes the basis for her compensation, plus medical expenses, plus pain and suffering damages. The verdict, actually, could have been higher.

Slip and fall accidents seem like basic claims but can sometimes result in severe injury. Call the Tampa personal injury lawyers at Palmer | Lopez today to schedule a free consultation and we can begin preparing your next moves immediately.