Woman Dies as a Result from Fall at Nursing Home 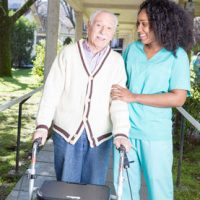 One of the most frequent causes of nursing home injuries is also a common injury resulting form basic negligence: falls.  When sedentary patients are transferred from a bathtub to a bed or anywhere else, there are procedures put in place to ensure that the process happens safely. Since older folks tend not to have the sturdiest bones, even a fall from a short distance can prove disastrous. In one instance it proved fatal.

The family of a 101-year-old woman has sued the nursing home where she resided. They allege that the individual on staff who was responsible for transporting her from her bath to her bed botched the process, dropping her to the ground. The woman suffered serious injuries and eventually died as a result of the fall.

Her story is not as unusual as you would think.

After the woman’s death, an investigation revealed that the individual who was operating the lift – the machine used to transfer sedentary patients from one place another – failed to follow protocol and this resulted in the woman falling out of the lift and onto the floor. The woman’s family filed suit against the nursing home alleging that it failed to screen its employees. The employee involved in the accident was wanted on a manslaughter and neglect charge.

The woman suffered extensive injuries to her lower body including multiple bone fractures. She never fully recovered from these injuries and later died.

The nature of her injuries was such that the woman suffered extensively before she died. She had multiple bone breaks and fractures in her legs, hips, and ankles. Had the nursing home employee simply followed the care plan she would not have suffered the extensive injuries that she ended up suffering.

Has Your Loved One Been Injured in a Nursing Home?

If you or someone you love has been injured by falling or being dropped in a nursing home or hospital, give the Tampa, Florida malpractice attorneys at Palmer | Lopez a call or contact us online, and we can begin on your case immediately.